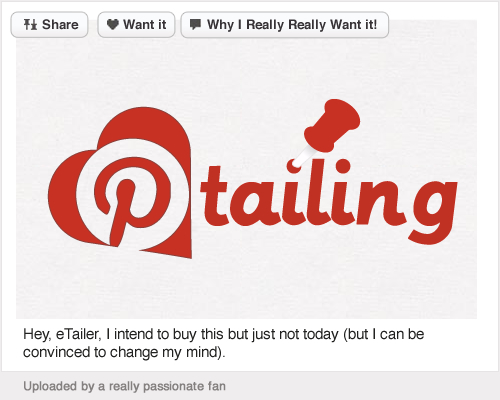 From a personal perspective, I’m a fan of Pinterest. From a business perspective, I am a HUGE fan of Pinterest. Why? Well the stats are staggering on how much the site, while still in beta, has grown to the point where it drives more referring traffic than Google+, YouTube, and LinkedIn combined!  Pinterest is becoming an increasingly important tactic for all of the social media strategist of ecommerce sites and retail brands.

Armchair Psychology behind the Pin

To understand the success of Pinterest you have to understand the psychology behind the act of “pinning”.  Pinning is a declaration.  A declaration that the Pinned image (ergo the object(s) in the image) is worth sharing.  It could simply be beautiful photograph or work of art but most of what you’ll find are objects of desire. When Pinners create Boards (collections of Pins) they become a collage of that pinner’s visual representation of their personal brand crafted (intentionally or subliminally) for public consumption. Public, mind you. Not just for friends. Pinners are curators of whatever they deem shareable. There’s even a gaming mechanic the comes in the reward of having their Pin “repinned” by as many people as possible. Repinning is not exactly a follow of Twitter and it’s far from the Friend on Facebook. It’s more like a hat-tip to say thanks for sharing. Eventually, the hat-tips become follows of a pinner’s board or entire collection of Boards.  Because the act of Pinning and Repinning is so effortless and visually driven it becomes in some ways more of an act of lust rather than a gesture of love or even a “Like”.  But that’s the secret sauce of Pinterest – we as marketers can turn that lust into sales and brand equity.

Purchase Intent and the Pin

There are many adjectives that can explain reasons behind a Pin such as “cool”, “interesting”, “amazing” but I’m more interested in one verb – “Want”. It’s easy for eTailers to be fooled by the visceral, lustful and even passionate act of thousands of Pins as a love of the brand. It’s not. It’s a collective of individuals declarations of “Want” of the brand’s object. Remember, they’re going by visuals alone. The difference between converting a Pin to a one-off sale versus converting the Pinner to a lifelong customer is still driven by the immutable laws of branding. Lust, love or like, the act of Pinning speaks volumes on purchase intent. And it’s because of this, that Pinterest is a game changer for eTailer and retail brands.  Our challenge create catalyst that drive conversion in their moment of attraction.

Turning a Pin into a Win

So in the end Pinterest is going to be force to be reckoned with.  What do you do? Pinterest does not yet have any kind of advertising model that we as marketers can leverage to reach our target audience. So how do you turn a Pin into a win?  Here are just a few quick ideas to get the Pinning started.

If your in the fashion arena, I highly recommend Pose.com. It went live around the time of Pinterest and has a eerily similar user interface. The main difference is this is consumer generated content where “Posers” snap photos of themselves wearing their favorite fashions then post to Pose for peer review.  Follow the influencers including Rachel Zoe and engage.  Heck, might as well Pin your Poses!